All posts in Legislative

Now that the public comment period has closed for the registration review of Aluminum Phosphide, Magnesium Phosphide & phosphine fumigants we wanted to share with you an update on the status of the Proposed Interim Decision (PID).

This update includes a review of the timeline, the proposed risk mitigation policies, updated descriptions of the PPE, the discussion surrounding buffer zones, pesticide resistance management, and several talking points for our industry to discuss and consider.

You can view and download our PID update by clicking here.

If you’d like to view the public comments submitted to the US EPA you can click here.

If you have any questions about this topic, or any other inquiries please feel free to email us at info@degeschamerica.com.

DOT Hours of Service Changes To Go Into Effect September 29, 2020

On June 1, 2020, FMCSA revised the hours of service (HOS) regulations to provide greater flexibility for drivers without adversely affecting safety. Motor carriers are required to comply with the new HOS regulations starting on September 29, 2020, not before.

Expands the short-haul exception to 150 air-miles and allows a 14-hour work shift to take place as part of the exception.

Expands the driving window during adverse driving conditions by up to an additional 2 hours.

Requires a 30-minute break after 8 hours of driving time (instead of on-duty time) and allows an on-duty/not driving period to qualify as the required break.

Modifies the sleeper berth exception to allow a driver to meet the 10-hour minimum off-duty requirement by spending at least 7, rather than at least 8 hours of that period in the berth and a minimum off-duty period of at least 2 hours spent inside or outside the berth, provided the two periods total at least 10 hours, and that neither qualify period counts against the 14-hour driving window.

To learn more about the final rule, please visit: https://www.fmcsa.dot.gov/regulations/hours-of-service

On August 27, 2015, the Canadian Pest Management Regulatory Agency (PMRA) published their Re-evaluation Decision Document for the continued registration of phosphine and metal phosphide fumigants. This initial decision included several mitigation measures that would have effectively made continued use of these products impossible. Among these key mitigation measures were:

In response, the Phosphine Producers Association (PPA), in cooperation with other affected stakeholders, filed letters of objection with the Agency citing a number of arguments, including that their decision was premature in that air monitoring data was currently being collected, and that the Agency had not properly considered the balance between the risk of using these products and their value to agriculture and trade. On August 29, 2016, the PPA submitted the data gathered in the course of the air monitoring study. Separate air monitoring data were also submitted by the Canadian Grains Council. Based on the submitted data, the PMRA agreed to revise their Re-Evaluation Decision. Key changes which will balance the needs of industry
while addressing PMRA’s concerns include:

The registrants have submitted amended Labels and Applicator’s Manuals for PMRA review. At this time, Phostoxin Pellets and Tablets, as well as Fumitoxin Pellets, have been approved.

On September 25, 2013, the US EPA announced in the Federal Register the opening of the docket and public comment period on the Registration Review of phosphine and the metal phosphide fumigants. Over the course of the 60-day public comment period, a total of 17 comments were generated from the registrants, industry groups, distributors, end users, and others. On March 20, 2014, the US EPA published their Final Work Plan; and on August 6, 2014, issued a Data Call-In (DCI). The status of the requested studies in the DCI is charted below:

Honeybee acute vapor exposure – Two studies were submitted to EPA on October 5, 2015. No feedback regarding these studies has been received from the Agency.

Acute inhalation toxicity study – A rangefinder study has been completed and the final report was submitted to EPA on August 28, 2017. The PPA is awaiting feedback from EPA on the proposed design for the main study.

Avian inhalation toxicity – The study was initiated on October 10, 2017. Results are currently in draft review.

Product use information – Information submitted to EPA on July 13, 2017.

Ambient air monitoring – A waiver request was submitted to EPA on October 28, 2016. No comments from the Agency have been received.

Inhalation exposure – A waiver request was submitted to EPA on October 28, 2016. No comments from the Agency have been received.

Inhalation exposure – indoor – A waiver request was submitted to EPA on October 28, 2016. No comments from the Agency have been received.

Monitoring data on fumigated commodities – The PPA cited existing data to satisfy this requirement on October 28, 2016. No comments from the Agency have been received. 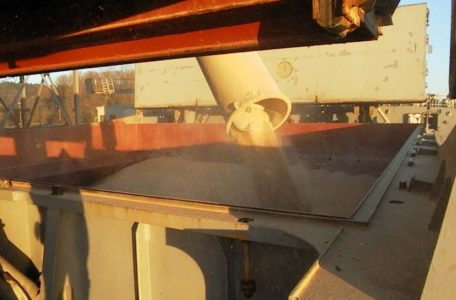 Degesch America, Inc., through our affiliation with the North American Export Grain Association, joined together with 125+ other members of the food and agricultural industry as signatories of a letter to President Donald J. Trump “to express our eagerness to work with your administration to keep American industry competitive, add jobs, and grow the U.S. economy”.

To view the letter in its entirety, please click here:  “North-America_FoodAG-Letter_Pres.Trump_170123-FINAL