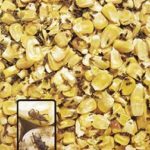 It is widely recognized in our industry that stored commodity insects can develop tolerance toward phosphine gas. When an insect or group of insects develops tolerance, one will observe levels of mortality that are relatively lower than what is expected. It is believed that development of tolerance results from the misapplication of phosphine through sub-standard fumigation practices, including poor sealing, low applied dosages, lack of maintaining toxic levels, fumigations that are too short, etc. All or any combination of these factors result in target pests being exposed to non-lethal phosphine fumigations, which allows the relatively tolerant individuals to proliferate. It is important to note that phosphine tolerance is not limited to geographical pockets, as it has been encountered across the globe, and while tolerance has been observed in populations of Red Flour Beetle, Lesser Grain Borer and the Cigarette Beetle, it is not necessarily limited to these species. Consequently, a great deal of research is being carried out by the industry and scientific community toward the goal of gaining a better understanding of how to minimize the development of phosphine tolerance in stored commodity insects. Among the domestic leaders in research is the USDAs Agricultural Research Service (ARS). Laboratory research conducted by the ARS on highly-tolerant insects demonstrated that control can still be achieved when phosphine gas concentrations are maintained between 500 and 1000 ppm, with 750 ppm being the so called “sweet spot” for optimal efficacy, over the course of at least 3 days at 70° F or above. These fumigation parameters generally hold for most insect species, with a few noted species-specific exceptions. For example, a tolerant Red Flour Beetle strain has a “sweet spot” closer to 2000 ppm. It is important to note that the “sweet spot” for a given species is stable, and does not change for relatively tolerant populations. The research also clearly indicates that the key to successful phosphine fumigations is maintaining the concentration as close to the “sweet spot” as possible over the duration of the fumigation. If the presence of tolerant insects is suspected, the duration of the fumigation should be extended, with an effort made to increase temperature if possible.